Back to Events
Soft Wax Presents

We’re thrilled that our headliner for the October edition of the Deptford Dub Club is the mighty Prince Fatty. This is a long awaited departure for us, as he regularly mans the mixing desk, in fine style. However he is a hugely experienced Reggae DJ and has spun all over the world, including to many massive Festival audiences – he’s touring in Mexico as I write.

Fatty’s sets span the entire spectrum of music of Jamaican origin, from foundation tunes to as yet unreleased exclusives; we can’t wait to hear what he hauls from his crates. Fatty is equally renown as a top flight record producer. In the sphere of Reggae, he has produced Gregory Isaacs, Little Roy, Dub Syndicate, Luciano, Winston Francis, Dennis Alcapone, George Dekker and Hollie Cook, amongst others. More broadly, he has also produced top roots artists including The Last Poets and Egypt 80. We feel privileged to have him for this strictly one-away, small venue show. Fatty’s a great friend of the D.D.C. and we are looking forward to his inimitable, crowd pleasing, connoisseurship.

The evening will commence with a warm up selection from Mr.Wax.

We’re delighted that he’ll be followed by Club stalwart Papa Scotchie. Papa is a well-established figure on the London reggae scene, he has DJed at nights across town and is also well known for his radio shows on vrlradio and beyond. The vibrant Scotchie exudes positive vibes and can be relied upon for a scintillating Reggae Revive set, presented with style.

Following Scotchie, there will be more of the semi-live action for which the Club is known, with some fresh Dubplate action. Soft Wax will be spinnin’ the rhythms. On the mic there will be toasting and singjay action, live and direct, from the mighty Doc Murdoch. There will also be live instrumentation from our fresh, new, Horn Section, led by Tombone and extra special guest vocalists.

We’re looking forward to another blinding evening of live mixes from the great Prince Fatty on the desk, early in the evening. We expect this night to be one of our most memorable. An enhanced sound system is a feature of this popular night, held in a convivial boozer. The palatial, discrete garden will feature Rocksteady all afternoon and have the evening session piped out to it. It has developed into a firm favourite chill out zone for Club regulars. Reach early and put on your dancing shoes. Come on down, put on your dancing shoes and surrender to the rhythm! 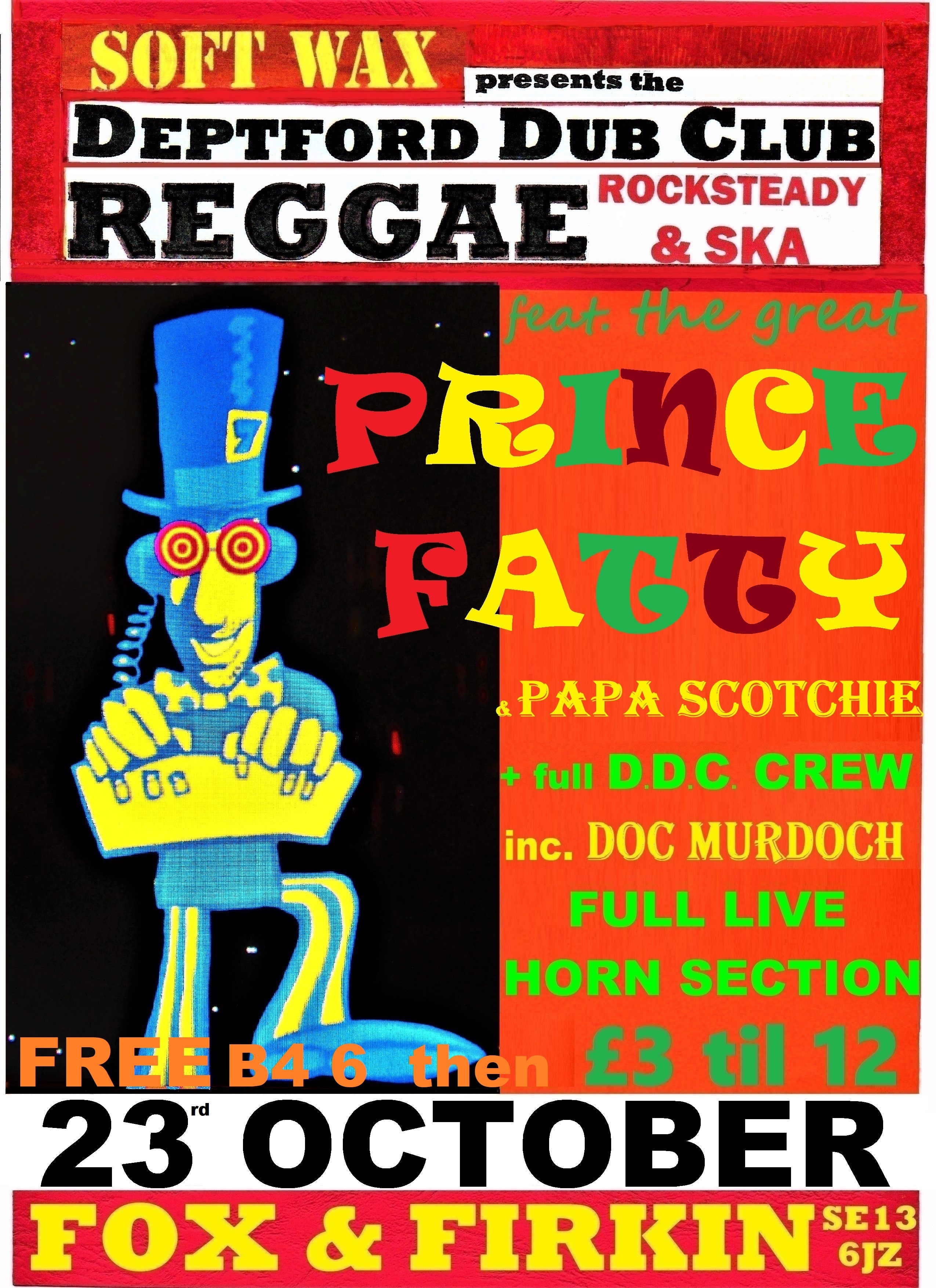