Back to Events
For k-punk Presents

For k-punk: The Weird and the Eerie

For k-punk presents the 2023 Mark Fisher Memorial Event. Commissioned by the Department of Visual Cultures at Goldsmiths University.

This January, For k-punk will be celebrating Mark Fisher’s final book, The Weird and the Eerie. These two terms were, for Fisher, two kinds of aesthetic experience. Common to tales of horror and the supernatural, he argues that the things we recognise as weird and eerie are not always aberrations to be expelled but rather problems to be solved.

An encounter with the weird might well signify the emergence of the new, for instance, whereas the eerie is encountered in those moments where our expectations are confounded and the givens we hold dear evaporate before our eyes.

Though aesthetic in its orientation, the implicit political message of Fisher’s final published works seems to be that this world of ours is unstable and our fictions consistently explore its many contingencies, opening portals to worlds quite different from our own. Five years on from the book’s publication, living in a world that is only getting weirder, we wonder where we are now.

Moving from the lecture theatre to the event space, this year’s event has a programme full of screenings, live performance, music and discussions. Curated by Natasha Eves, together with James Sibley, Zara Truss Giles, Olga Paczka and Matt Colquhoun.

Incursions is a collaborative walking project based in Newcastle-upon-Tyne, facilitated by Archie Smith and Kitty McKay. Through practices of psycho/socio-geography, collective research, mapping, archiving and friendship, they work to shift dominant neoliberal narratives of space and place, co-authoring counter-narratives for how we inhabit civic worlds and build active solidarities. Their weekly walking forums in the North East, drawing on social histories, pop cultures and personal experiences, form part of a broader project that utilises moving-image, radio and sound production, archival techniques and community cooking to deepen relationships between people and place.

Robin Mackay is the founder and director of UK publisher, Urbanomic. He has written widely on philosophy and contemporary art, and has translated influential works of contemporary French philosophy including Alain Badiou’s Number and Numbers, François Laruelle’s The Concept of Non-Photography, and Quentin Meillassoux’s The Number and the Siren.

W.H.Y. / Zara Truss-Giles is a cross-disciplinary artist and artist producer living in London where they have carved a name for themselves as a DJ, club night promoter, producer and  performance artist. Their project W.H.Y. is rooted in the hidden and untold histories of individuals and community movements, through extensive research projects and conversations with those with living memories, stories and experiences. They also run the Distribution of Power project, a modular synthesisers library/ learning programme.

Paul Rooney is an artist/musician based in Liverpool, who makes music with words “investigating the intersections of music, myth, memory and place” (The Wire magazine). His installations, videos, writing and records assemble the contrary, unpredictable narratives that haunt particular places, fabricating fragmentary voices that comically and unreliably spook the present from an unquiet past.

Nat Sharp really hit her stride in 2017 with the ever-mutating live performance piece Trifle – a mind-frying mix of film, performance art, live band, electronic hoe-down, make-up, prosthetics, inflatables and audience/performer interaction (or mass food fight). The sheer tactile and sense-defying thrills of Trifle elevated her to Queen of the uncategorisable DIY underground status in the UK and as such as she was interviewed for BBC Radio 4's New Weird Britain series.

Her next full-scale venture was Body Vice in 2019, another ground-breaking multi-media live show dealing with the themes of pain and disability (Natalie has back trouble due to problems with her spinal column and constant pain due to osteoarthritis). The piece, in a typically thoughtful, inventive and funny way, combined the rave adjacent noise of MRI machines, body suits that made the wearers look as if they'd been flayed alive and banging grime/footwork interludes about medication, with synths made from haptic spines.

After relocating to Todmorden in Lancashire, her creative thoughts have turned to her family roots (her Dad is from Cumbria, her Mam from the Seychelles and their family home is in Wigton near Carlisle). Her newest project Marra! is an interrogation of endangered Cumbrian dialects and customs, from gurning to greasy pole climbing, via the mad world of competitive pipe smoking and livestock auctioneering.

Psychedelic in form + function: cloaking the dreamer, alchemically patchworked together, a focal point for neurosis that transfigures obsessive tendencies into objects that balance comfort + overwhelm - quilts hum with acidic potency. When activated by audio-visual installation + performance, quilts generate environments of breakage, spaces for the thresholds of consciousness to be agitated - as emulation/invocation of the bliss found under rave - rapturous ecstasy brought on by overstimulation - a vibrational possession. Taken by rhythm, a moment of total (dis)embodiment.

DJ Gonz is a DJ and producer based in London. He co-runs the South-East London based label SELN Recordings with Conrad Pack. He’s previously played at nights such as People Drift and SCRAM (Ormside Projects). Predominantly working in Techno, his sound aims to capture a sense of urgency, longing and hope.

Natasha Eves is a textile artist and publican. Currently, she runs a traditional community-oriented pub in South-East London, and teaches constructed textiles to undergraduates and postgraduates at Goldsmiths, University of London (UK). Together with friends she has organised events ‘For k-punk’ since 2018 to celebrate and share the radical and irreplaceable energy of her/their former teacher Mark Fisher. In 2019, she completed her masters in Contemporary Art Theory at Goldsmiths and the California Institute of the Arts (USA), going on to participate in School of the Damned (2020-22), a free, self-organised alternative art school. 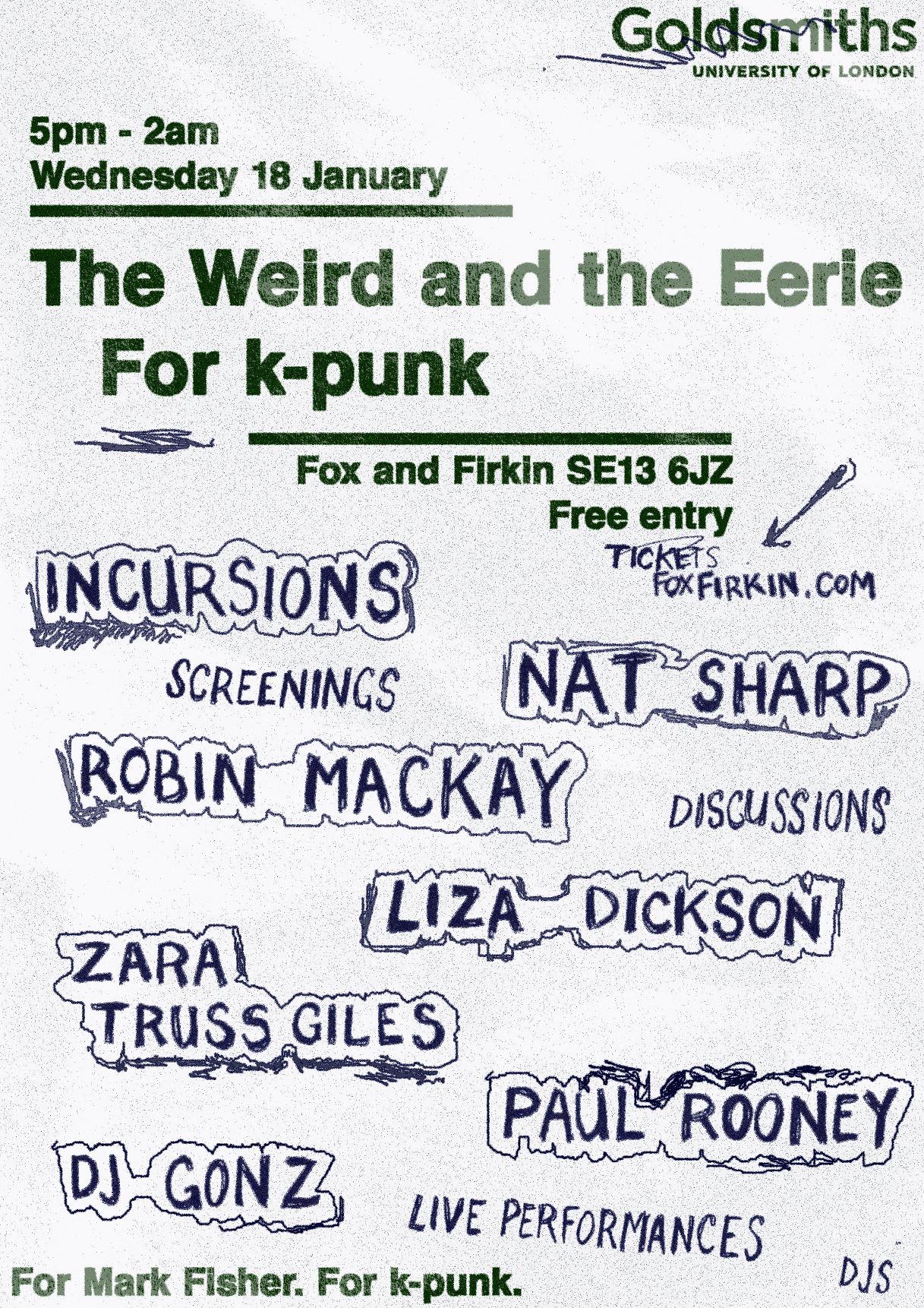